How to Debate a Christian Apologist

Recently there seems to have been a rash of debates between atheists and Christian apologists. Of course, we had the much-ballyhooed debate between Ken Ham and Bill Nye on creationism versus evolution (“Ham on Nye”), which only served the purpose of giving Ham’s ridiculous beliefs attention they did not deserve. And, it got Ham enough money from donors an taxpayers to complete his theme park. [Read more]

Many Americans remain uncomfortable with electing a president who doesn’t believe in God, as evidenced by a recent Pew Research survey. Asked about a list of traits and how each would impact their likelihood of supporting a presidential candidate, about half (53%) of Americans said they would be less likely to support an atheist. No other trait, including being gay or having never held elected office, garnered a larger share of people saying they’d be less likely to support the potential candidate. But some of the stigma associated with atheists may be fading as the number of U.S. adults self-identifying as atheist or agnostic rises. [Read more]

At least 30 Christians were shot dead by Muslim rebels in an attack on a church in the war-torn Central African Republic, a pastor said. “We were in the church when were heard the shooting outside,” the Rev. Freddy Mboula of Notre Dame de Fatima in Bangui told The Associated Press on Wednesday. “There were screams and after 30 minutes of gunfire there were bodies everywhere.” [Read more]

A few days ago, the president of Cathedral Bible College in Marion, SC was arrested for allegedly forcing international students to work long hours for low pay by threatening their immigration status. Although there are still few details, various news outlets have reported that federal agents have probable cause to charge Reginald Wayne Miller with forced labor, a felony that can carry up to a twenty-year prison sentence per charge. It’s a serious charge, of course, and it serves as a good reminder that we still live in a world where practices of severe exploitation are not unknown. [Read more]

One in Four Canadians Declare Affiliation to No Religion, But Why Are So Many ‘Nones’ Surprisingly Religious?

To sociologists of religion, they are the “nones.” Officially non-religious, they are not Catholic, nor Jewish, nor Sikh, Muslim, Buddhist or Anglican. Asked for their religion, they tick the box for “none.” But this is not quite right. Rather, according to new research presented at the Congress of the Humanities and Social Sciences, the “nones” look more like “somes,” with a great many still behaving as “spiritual seekers” in their own way. In an age of “individually constructed belief systems and personal spiritual practices,” the rise of the nones “may not necessarily be coupled with a complete decline of other types of religiosity,” according to Sarah Wilkins-Laflamme, a Canadian studying at Oxford University. [Read more]

How One Fundamentalist Knows The Bible is God’s Word 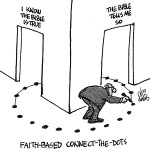 According to Gregg Fetter of Bible Made Simple: The Site That Shows You How to Live the Bible, the Bible is God’s inspired word because, well, because it says it is. Fetter writes: Recently my wife told me about a friend of hers who doesn’t feel that the Bible is necessarily complete.  She feels that there are “more books” to discover.For this reason she’s open to considering such books as: The Book of Enoch, The Gospel of Thomas, The Apocalypse of Peter, The Epistle of Barnabas, The Gospel of Judas, The Gospel of Mary Magdalene and other historical literature as potential scripture. Is it okay to treat these books as scripture? [Read more]

Families of children allocated places at Hindu faith school in the London Borough of Redbridge plan to appeal the decision, saying the school’s religious ethos is at odds with their own beliefs and values. Some families have missed out on all preferences listed on their school application form, and have instead been allocated places at Avanti Court Primary, a Hindu faith school in Redbridge. [Read more]

Imagine a church that meets outdoors. Rain or shine. Next to a fishing hole. Around a campfire. There’s no shortage of men in this church. In fact, guys come early to go fishing – and stay late to talk around the fire. Sound like a little bit of heaven? It’s called The Sportsman’s Church, and it meets every Sunday night in Victoria, Texas, 125 miles southwest of Houston. Bring your Bible – and your fishing pole. [Read more]

Steve Jones, a professor in genetics at University College London’s Galton Laboratory, spoke at this month’s Hay Literary Festival where he pointed out that Europeans have a falling birth rate while Christians in countries like Africa have a rising rate. Europe, Jones notes, is not doing well at “replacing its population.” “We atheists sometimes congratulate ourselves that the incidence of religious belief is going down,” he said. “But religious people have more children,” Jones continued. [Read more]

According to a recent poll from the US-based Pew Research Centre, the UK has a more favourable opinion of its Muslim community than any other European country surveyed. The poll carried out in relation to the Euro elections found that 26% of Britons had an “unfavourable” view of Muslims in the country (64% were “favourable”), whereas in Italy 63% said they had an unfavourable view of Muslims with only 28% saying they have a favourable view. [Read more]

The Ecumenical Jury at the Cannes Film Festival has awarded its prize to a film about the imposition of a totalitarian form of Islam on a village in the northwestern African country of Mali, Variety magazine reports. Timbuktu, directed by Abderrahmane Sissako, a filmmaker from Mauritania, tells the story of how local people resist the arrival of extremists who want to restrict women’s liberty and to outlaw music and football. [Read more]

“Oh, she’s going to die soon! I can’t handle the thought of it. Alexis is puking every day and is too weak to move. She has end-stage cancer and is in excruciating pain. She and the doctors want to hasten her death through euthanasia. But that is wrong because it is the doctor killing her. All life is sacred and only God should be able to decide when she dies.” “Oh, she’s going to die! Alexis is suffering so much with cancer and is not able to live the way she wants. She is in her last days of life and has decided with the doctors, family, and friends to take the route of euthanasia. I hope that makes the transition to death easier for her and I respect her decision.” [Read more]

When women leave moderate forms of religion, are their stories less interesting or was it a coincidence that all but one of the deconversion narratives I heard at the Women in Secularism III conference May 17 in Alexandria, Virginia, involved women leaving fundamentalist versions of faith? Because I’m a Christian, and I would leave those too. [Read more]

It Takes A Church: A Dating Show Only Your Mother Would Love

Will We Meet Aliens in the Near Future?

Humans have long wondered whether we are alone in the universe. According to scientists working with the Search for Extraterrestrial Intelligence (SETI) Institute, the question may be answered in the near future.”It’s unproven whether there is any life beyond Earth,” Seth Shostak, senior astronomer at the SETI Institute, said at a House Committee on Science, Space and Technology hearing Wednesday (May 21).

Mr. Deity: Is the Noah’s Ark Tale “One of the Most Moral Stories Ever Told”?

Here Mr. Deity sheds his persona of God and simply becomes Keith Dalton, going full-out against religionists. In his latest video, “The Way of the mister: In defense of killing babies,” he takes apart an column by Dennis Prager (see below), defending the Noah’s Ark story as not only historically accurate, but, despite its aqueious genocide, “one of the most moral stories ever told”!

D&D Chick Tract Coming to a Theater Near You

Anyone who felt stigmatized in their youth for playing Dungeons & Dragons will be excited to see JR Ralls’ Kickstarter-funded film adaptation of Dark Dungeons—the over-the-top anti-D&D tract by the enigmatic evangelist Jack Chick. [Read more]

Nineteen months ago, I visited a farm in the West Bank, about 6 miles from Bethlehem. The Nassar family, Palestinian Christians, have established “Tent of Nations” there — a program of peace-seeking, uniting people of different ethnicity and tradition in creative relation to the land. [Read more]

Where Netanyahu Gets His Ideas About Jesus

There’s been a fair amount of coverage of that uncomfortable moment in Jerusalem, when Pope Francis corrected Israeli Prime Minister Benjamin Netanyahu about the language Jesus spoke. He spoke Hebrew, said the Israeli head of state; no, corrected the Pope, he spoke Aramaic. [Read more]

Muslims Should Be Ashamed of Islam